Charlie is survived by his wife, Professor Norma Thompson, Associate Director of Yale’s Whitney Humanities Center and Senior Lecturer in the Humanities; his daughter Catharine L. Smith of Washington D.C.; and his grandchildren Christopher N. and Laura C. Van Lieu. He was predeceased by his daughter, Emily C. Hill Van Lieu.  In lieu of flowers, memorial gifts can be directed to the Charles Hill Fund for Liberal Education at the Community Foundation for Greater New Haven, 70 Audubon Street, New Haven, CT 06510.  Online gifts can be made here. 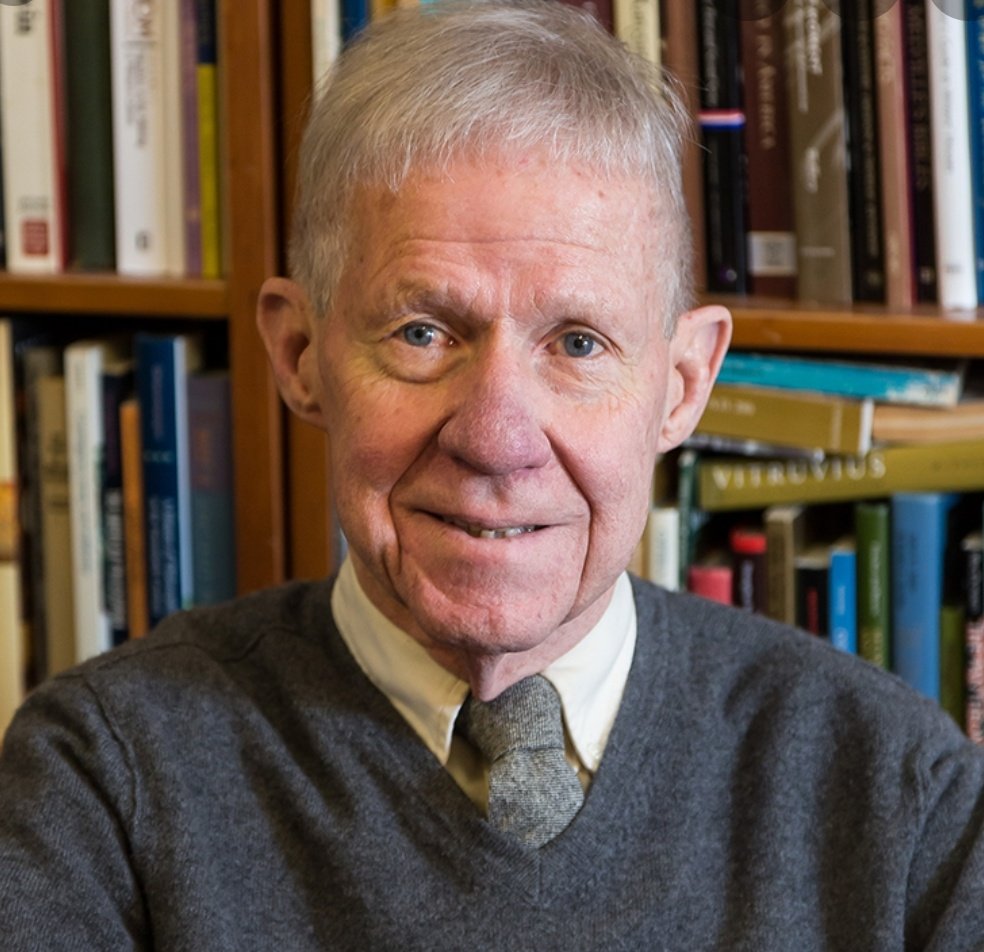 Yale never knew quite what to make of Charlie Hill.  That’s why, after a remarkable career in the United States Foreign Service and at the United Nations, he had so many academic titles:  Lecturer, Senior Lecturer, Diplomat-in-Residence, Distinguished Fellow.  Nor was it clear where he fit:  was it History, Political Science, Humanities, International Studies, International Security Studies, the Jackson Institute for Global Affairs, the Johnson Center for the Study of American Diplomacy, or – perhaps most comfortably – the Brady-Johnson Program in Grand Strategy?

The most appropriate title for him, therefore, might simply be “Teacher.”  And what did he teach?  “Just about everything.”  He was Yale’s last universal man.

Charlie often said to me – and to others who tried to lure him elsewhere – that teaching at Yale was the most important thing he’d done or could henceforth do.  His students long ago figured this out:  they distinguish between professors who regard teaching as a distraction, even a chore, and those who see it as at the heart of what it means to “profess.”  Students flocked to his courses, and he in turn taught more of these than most of the rest of us ever will.

The normal teaching load at Yale is four courses a year or, in certain social sciences, three.  They don’t need to be new:  some professors repeat themselves so dutifully that their students can chant along with them, using yellowed notes from preceding years.

But not Charlie.  In addition to his regular courses in Directed Studies and Grand Strategy, he developed new ones on “Intellectual Circles,” “Strategic Fictions,” “Strategies of World Order,” “Oratory in Statecraft,” “Washington, D.C.,” “Shanghai,” “The Mississippi River,” “Tibet,” and “Baseball” – I’m sure there’re others I’ve missed.  He also ran Friday afternoon “Office Hours,” to which students could come to talk about whatever else might be on their minds.

The Yale Daily News correctly memorialized Charlie, in its obituary, as one of Yale’s “legendary” professors.  He was unique among them, however, in not having had a specialty:  instead he made connections among specialties.  That’s what life beyond Yale does, which is why Charlie’s real subject was “How the World Works.”

Teaching seminars alongside him was a privilege, but it wasn’t puncture-proof.  He’d sit Buddha-like through pontifications like what I’ve written above.  Then he’d sigh and say:  “In the time remaining to us …”  It’s what we have to say to ourselves now, as we go forth without him.

For around twenty-nine years, from sometime in 1992 until a few days before taking ill in March 2021, Charlie Hill occupied a succession of small offices in International Security Studies at Yale.  The first was in an elderly building at 12 Prospect Place, since obliterated; the last one was on the third floor of 31 Hillhouse Avenue, not much larger in size.  All his offices reminded me of those crowded, fascinating second-hand bookstores one found in, say, the English Lake District, with the owner sitting behind a desk just inside the entrance while the books were everywhere around.  Some shelves of works on the Middle East flowed into the Penguin Specials, or the Dent classics.  Robert Graves and Kim Philby lay on top of the latest solemn work on Kissinger’s Realpolitik.  Literary magazines, in no apparent order, lay in stacks.  Or had slipped to the floor.

Any confusion here was only in the visitor’s mind.  This mini-library, for that was what it was, formed an integrated whole in Charlie Hill’s intellect and method: literature, travelogues, the Far East, the English Metaphysicals, Plato, John Buchan, Whitman, it all hung together if you read it properly.  It was not of course that a student went up to this third-floor office to get a tutorial on Buchan’s “The Blanket of the Dark”, or Donne’s great poems.  Most of them went there to be told that the draft essay they had written for one of the myriad of undergraduate seminars that Charlie taught at Yale had serious flaws in it.  A number of them remember getting the first-ever C in their lives.  But they clung on in class, steadily realizing that they were in the presence of a great teacher.

Yale undergraduates were not the only ones who tramped upstairs to pay a visit to Charlie Hill’s office.  Each year the new U.S. Marine Corps Fellow, an impressive Lt.-Colonel attached to International Security Studies, would have many a chat with him, pushing at him questions about current affairs, or Kissinger’s National Security Council, or about the place of the military in modern American society.  The small ISS team, working for three years in the mid-1990s on their Report on the Future of the United Nations, would drop by to consult with Charlie.  Intrigued Olin/Chauncey post-doctoral fellows wanted to talk.  Yale Daily Mail reporters, eager for an insight, came by; so did the occasional Japanese journalist, or an attaché from the Israeli embassy.  I occasionally thought that we should have a notice at the second-floor stairhead saying “Professor Hill’s Office…Keep Going Up.”

But Charlie was also available in another way in the ISS offices, at another level, and at a specific weekly time.  I am not sure how early it was during his years at Yale that he established a sort of “open house” each Friday afternoon in termtime, where he sat in the downstairs small seminar room, willing to try to answer any matter that the Yale undergraduates (and sometimes the military fellows) wanted to raise.  Any Yalie could attend, and the door was kept open so a nervous newcomer, or a runner coming straight from track, could just slip in a bit late.  Not many students attended this open house every time, of course not, but those who did thought that it was pretty remarkable.  This may have gone on for three decades, for Charlie took no sabbaticals.  As the ISS staff left the building each Friday for the weekend, they would hear the low murmur of conversation coming from the seminar room.  It would end around five, as the cleaners clanked their way into the front door.

Many other have written of this brilliant man’s inimitable performances in the Grand Strategy seminars, or of his thousands of pages of perfectly composed notes and memoranda for Secretaries Kissinger and Schultz, or of the oratory of his lectures, and each of those was indeed an aspect of the composite Charlie Hill.  Yet I think that the most lasting memories that the ISS staff, and I myself, will have of our long-lasting pal is going to be of that crowded upstairs office towards which yet another student was tramping, or of the murmur of intellectual discourse late on every Friday afternoon.  Many teachers and professors in their time get labelled with the adjective “unique”; but as his friend Sam Chauncey likes to remark, in Charlie Hill’s case, that word really applies.  In a half-century of working with British and American academics, I have not known a scholar as remarkable as he was.  It will be hard to think that he is not still in that building.

Eric Edelman, “The Passing of a Diplomatic Legend and Master of Grand Strategy,” The Dispatch (April 2021)