The Struggle to Save the Soviet Economy by Chris Miller 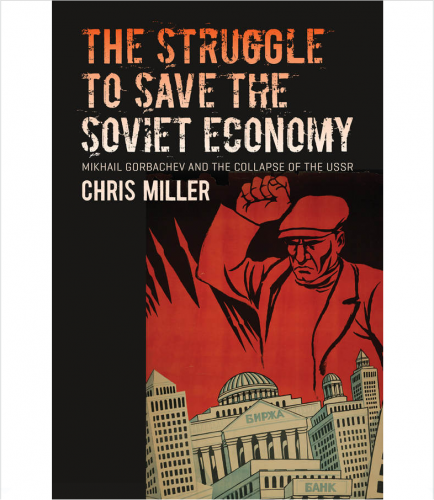 November 17, 2016
Body:
Brady-Johnson Associate Director Chris Miller’s book, The Struggle to Save the Soviet Economy: Mikhail Gorbachev and the Collapse of the USSR (The New Cold War History) , has been released.

For half a century the Soviet economy was inefficient but stable. In the late 1980s, to the surprise of nearly everyone, it suddenly collapsed. Why did this happen? And what role did Soviet leader Mikhail Gorbachev’s economic reforms play in the country’s dissolution? In this groundbreaking study, Chris Miller shows that Gorbachev and his allies tried to learn from the great success story of transitions from socialism to capitalism, Deng Xiaoping’s China. Why, then, were efforts to revitalize Soviet socialism so much less successful than in China?

Making use of never-before-studied documents from the Soviet politburo and other archives, Miller argues that the difference between the Soviet Union and China–and the ultimate cause of the Soviet collapse–was not economics but politics. The Soviet government was divided by bitter conflict, and Gorbachev, the ostensible Soviet autocrat, was unable to outmaneuver the interest groups that were threatened by his economic reforms. Miller’s analysis settles long-standing debates about the politics and economics of perestroika, transforming our understanding of the causes of the Soviet Union’s rapid demise.

The book is already earning praise. Niall Ferguson wrote, “The Soviet collapse was the unexpected denouement of the ‘short 20th century,’ but Miller shows that it was not something willed by Mikhail Gorbachev alone. Rather, the powerful vested interests that resisted fiscal reform–the military and the KGB, the collective farm lobby, and the energy industry–were the real causes of the Russian Katastrophe. This is a meticulous autopsy on homo sovieticus.”

The books is available on Amazon.