The FBI: Past, Present, and Future: A conversation with James Comey, Asha Rangappa, and Beverly Gage 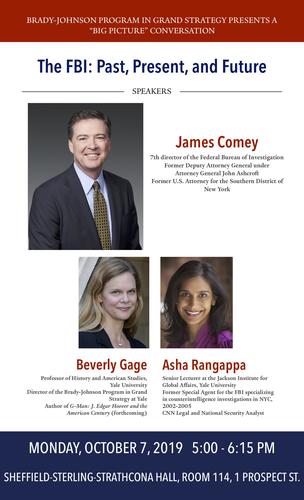 On Monday, October 7 2019, the Brady-Johnson Program in grand Strategy will host a public talk: “The FBI: Past, Present, and Future”. This event will be a moderated conversation with James Comey, Asha Rangappa, and Beverly Gage.

James Comey is an American Lawyer who served as the 7th director of the Federal Bureau of Investigation from 2013 to 2017. In his earlier career, he served as the Deputy Attorney General under Attorney General John Ashcroft and was the former U.S. Attorney for the Southern District of New York. James Comey received his B.S. with honors from the College of William & Mary and his J.D. from the University of Chicago Law School.

Asha Rangappa is a senior lecturer at the Jackson Institute for Global Affairs at Yale University and a CNN Legal and National Security Analyst. Asha was a former Special Agent for the FBI specializing in counterintelligence investigations in NYC from 2002 to 2005. She Graduated from the Woodrow Wilson School of Public and International Affairs at Princeton University in 1996, and from Yale Law School in 2000.

Beverly Gage is a Professor of History and American Studies at Yale University and is also the Director of the Brady-Johnson Program in Grand Strategy. She is the author of “The Day Wall Street Exploded: A Story of America in Its First Age of Terror” and is currently working on “G-Man: J. Edgar Hoover and the American Century”. She received her B.A. in American Studies from Yale College in 1994, and her Ph.D. in History from Columbia University in 2004.