Blood, Soil and God: A Discussion about Identity and Foreign Policy with Ross Douthat, Carlos Eire, and Victoria Nuland 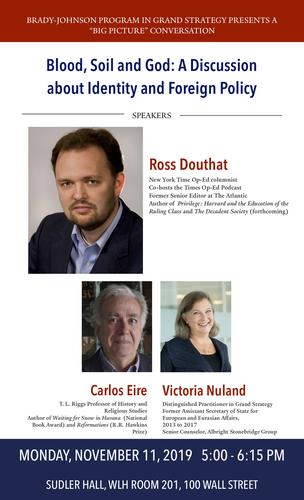 On Monday, November 11 2019, the Brady-Johnson Program in grand Strategy will host a public talk: “Blood, Soil and God: A discussion about Identity and Foreign Policy”. This event will be a moderated conversation with Ross Douthat, Carlos Eire, and Victoria Nuland.

Ross Douthat has been a New York Times Op-Ed Columnist since joining in 2009. His column appears every Tuesday and Sunday, and he co-hosts the Times Op-Ed podcast, “The Argument”. He previously was the senior editor at The Atlantic ans is the author of “To Change the Church: Pope Francis and the Future of Catholicism” and “The Decadent Society” that is forthcoming in March 2020.

Carols Eire is a T. Lawrason Riggs Professor of History and religious Studies at Yale University and specializes in the social, intellectual, religious, and cultural history of late medieval and early modern Europe. He received his PhD from Yale in 1979 and taught at St. John’s University in Minnesota and the University of Virginia before joining the Yale faculty.

Victoria Nuland is the former Assistant Secretary of State for European and Eurasian Affairs at the United States Department of State and is also a Distinguished Practitioner in Grand Strategy at Yale University. She was previously the CEO of The Center for a New American Security and is now a Senior Counselor at Albright Stonebridge Group.